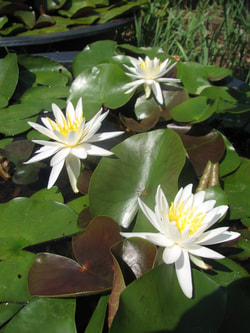 We grow over 50 varieties of hardy water lily that we sell to walk-in customers at the nursery. We do not ship lilies.

My brother and I built a pond at my parents house in the early 70s when I was in my early teens. I was more interested in fish at the time (my mother was the gardener) and the pond was built more as a koi pond than a water lily pond. I do remember flipping through water lily catalogs and picking out lilies, though, so I must have had some interest in growing water lilies as well. At one time or another, the pond had 'Chromatella', 'Attraction', 'Marliac Albida', 'Amabalis', 'Hermine' and 'James Brydon'.

That early interest has blossomed into what I call my "hobby within a business," as I take as much pleasure in simply growing water lilies, observing and photographing them as I do in selling them. We don't grow in large numbers and may not have all lilies available at all times. But if you visit the nursery and see a lily that you particularly like, flowering in a stock plant tub, that is not available in the sales area, I will see if I can take a division of it and pot it up for you on the spot. Dividing a lily during the growing season does set it back a week or so, but they recover pretty quickly and are likely to still flower during the current growing season. And, unlike terrestrial plants, you don't have to worry about watering them!

My collection does not contain every named variety of water lily that exists. I try to be more discriminating. Some named varieties look just like another variety - there's no reason to keep both in the collection. There are a kazillion varieties of pink and white to red and white bicolor lilies. I've tried to keep the best ones and discard the others. What criteria do I use? I like a lily to be distinct enough that I can identify it without pulling its label out of the pot. And I like lilies that flower prolifically - that is the point after all, isn't it? The only one water lily that doesn't flower prolifically that is worth keeping around is 'Gloire du Temple sur Lot' - and I've even thought of tossing it on the compost pile because 'Lily Pons' and 'White 1000 Petals' are similarly spectacular in form but flower more prolifically.

Each lily description is accompanied by an assortment of photographs. The color of a lily as it appears in a photograph is dependent on a number of factors - sunlight (I grow all the lilies in full sun, but occasionally the sun is behind a cloud when I take a photograph), age of the flower (most open for a total of 4 days - red and pink lilies in particular change quite a bit over time over that period, generally becoming deeper in color), time of the year (many of the Strawn hybrids in particular change appearance over the growing season). For all these reasons, I think it's important to see a variety of photographs of a particular lily to get a good feel for its appearance.

I believe all the lilies I show on this site are correctly identified to their variety. Many of the red varieties and pink and white bicolor varieties can be difficult to tell apart (I've spent many more hours than I ever should have trying to figure out the variety of a lily that I've lost the label on or was sent to me in error by another grower - a few I've simply had to give up on.